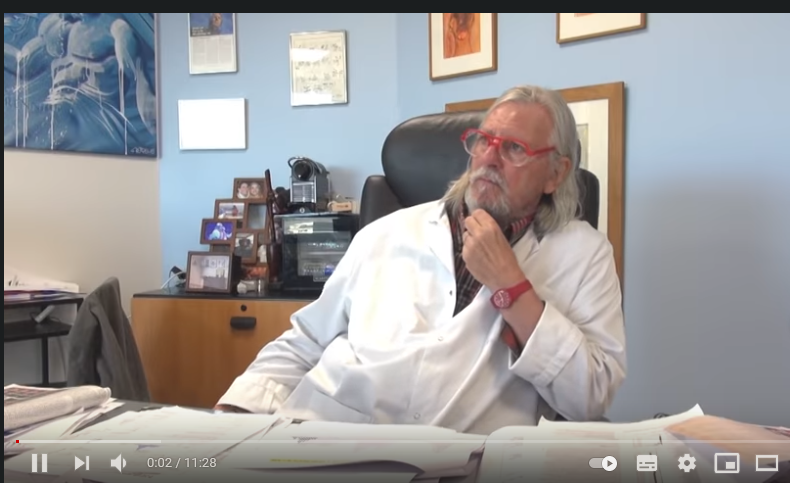 Translation : Citizen4Science – Please report any errors or omissions to us – Notes by the translator in parenthesis and italic characters are for better understanding of non French readers) – YouTube video at the bottom.

Question: « Professor Didier Raoult, what do you think about these SARS-Cov-2 infections in vaccinated patients? »

This shows, again, I regret to remain consistent with myself, but globally for all these RNA vaccines, if you like, there is hardly any magic, so they are vaccines that mutate a lot, so new ones are created all the time, quasi-species, variants are created all the time, if you like, and so we are not surprised to see that there are variants that resist; and moreover, these vaccines are not very effective, depending on the variant, they have a real protection rate between 60 and 80%.

So what is happening, and I regret this, is that we live too much at the rhythm of journalism, which is one piece of information per hour, now; before it was per day, now it is per hour, there is a new piece of information that is more or less verified, then there is a new hope and a new despair, and medicine is not like that, and epidemics are not like that, it is necessary to have a little bit of calm and to have observational data before coming to conclusions.
Here, the observation data that we see is, we said, look at the English are the model; I had some doubts because the biggest mistakes that were made during this epidemic were made by the English and as it is the model for everyone, we followed a lot the mistakes the English made and this leads to the fact that it is likely that the highest mortality in the world was the one of London, which was the beacon of medical research.
In London, we find The Lancet, Nature, etc. This is a question that should be asked and we can see that there is a distortion of the information in the English newspapers which leads to the fact that they are the first victims, so where there were the most victims is there. Globally, where there were the most scientific journals, the most financial means for, for care, the most corruption and the most pharmaceutical industry, it is there. So it is a kind of paradox, it shows that there is a paradox in the fact that it’s become a disadvantage to be the one that we thought was the leader, it’s, it’s something that will lead us to think.

So, I saw recently and you will see the video, a correspondence curve between the degree of corruption assessed in the richest countries and mortality for Covid and you will see that there are correlations that are very clear, the least corrupt country is Denmark, and it’s one of the countries that has managed the best. They don’t have an industry, they don’t have, you see, there are, and they have rules of operation that prevent it from drifting completely, so there is a real problem, so as usual we said it’s the English who know how to do it best? Look, they have made an extraordinary vaccine, I don’t know who will want Astra Zeneca‘s vaccine again soon, like uh, the story of Remdesivir, it’s, it’s a hope of a climax where they managed to sell a billion of them the day before, when we said it was useless, but finally, we can see that the English have said: Look, it’s wonderful, they know how to do it, they have vaccinated a lot, well, the epidemic has collapsed, but

Currently, the number of daily cases is equivalent to that of the heart of the epidemic in November, therefore, an evolution of the curve such as it is there now, what is the part of the vaccine in it, it is possible that the vaccine plays a certain part of the game but in practice as there are variants and that there will continue to be variants and it is especially the Indian variant which develops currently in the United States and in England but also in the United States but also in France and well it is well possible that indeed the vaccination is rather less effective with this new variant and, towards others, this is also what we find now in Israel and that therefore uh, the policy of, extremely active vaccination will not have given the expected results and therefore the model that was presented to us is currently behind us in epidemiological terms, while we vaccinated more, so things are not so simple, once again, there is no magic wand; In our country, we can see that the number of people vaccinated follows the curve of the epidemic very precisely, which is good

ith just the proportion of those vaccinated that you see here increasing.

This is the number of positives that is decreasing because the epidemic is decreasing but the proportion of vaccinated people among our positives is increasing and we don’t have the impression that it is radically different from that of non-vaccinated people, so it is, it is a question that puts back on the table once again, wait, we can’t think that everything is going to be solved by vaccination as it exists now. Afterwards, the future belongs to no one, as Victor Hugo said, we will ll see, but for the time being we do not have a perfect solution with this type of vaccine. So this vaccine, the capacity of this vaccine to protect the whole population even when we have extremely high vaccination rates is incomplete, so there will remain problems to be solved and in particular by care.

Yes, globally on what we have, we had 572 vaccinated patients that we analyzed, let’s say among those, there were 10% hospitalized patients which corresponds globally to what we have with, what we had during all, all these epidemic episodes, there were 7 who went to intensive care unit and 8 who died so we have a mortality that is comparable to what we had in non-vaccinated people.
But I reassure you, of course the people who die are the same population, that is to say, they are very old people or people who have a very low life expectancy. So we have to come back to the point that this disease kills people over 65 years old who have associated risk factors or people over 75 or 85 years old who have a very low life expectancy.
So it is not a disease that is going to kill, to start killing children unless the virus changes or there is another virus, but this is not the case, so globally including even the INSEE statistics show that we have a decrease in mortality in all age groups up to 60 years. It is only from the age of 60 that mortality has increased in 2020 compared to 2019, so, one, it does not deserve such a panic, two, we must treat people, especially the elderly, three, we really need to test innocuous molecules such as Ivermectin or Hydroxychloroquine in particular in these episodes and in particular in EHPAD (residential care homes for elderly and dependent people in France) where it is the most important problem and globally we know that almost all the requests for therapeutic trials in EHPAD have been refused at the level of this country as well We know that now, because we have official data from the ANSM (French Agency forSafety of Medicinal Products and Health Products) answering to people who wanted to evaluate this in EHPAD, it was refused, so the population most at risk is this one. If you really want to reduce mortality, you have to take care of this population with known risk-free drugs, to be able to treat them and reduce mortality, that’s it!

Question:  « Are all variants equally susceptible to the vaccine and are vaccinated carriers contagious?«

Then, we have to set things straight, because there are newspapers, in particular an evening paper (translation of « journal du soir », maybe a reference to France-Soir »?) that specializes in parallel information, the patients who are carriers of the virus and not sick are as contagious as the others, so they have virus, they are cultivable virus and therefore the proportion of cultivable virus in people who are asymptomatic is the same as in those who are symptomatic, and the same as in those who are vaccinated and carriers of the virus, ok. So, the rest is opinion, because nobody in the world has grown as many viruses as we have, we have 3,000 isolated strains. Nobody has that, so we are the only ones who can make statistics, the others make deductions, okay! And the fact that we don’t know how to grow viruses in particular if we keep the cells in toxic conditions, which many laboratories that are not specialized in the culture of this virus from human samples cannot keep the cells for more than 7 days, and so the cultures that are a little bit slower, they miss out. So when there is little virus, you have to be able to keep the cells for 15 days to detect it. There have to be a lot of viruses to be able to detect them in the first 7 days, so people who don’t know, but this is science, it’s not journalistic communication; it’s science [laughs]. Science, we cannot say that someone who is a carrier of viruses in upper respiratory tract, mouth, nose, is not contagious, we cannot say that, it is a fantasy, that’s it.
In any case, it cultivates very well and therefore it cultivates as well as when you are symptomatic and it cultivates as well as when you have been vaccinated and probably, we are studying this, in people who are carriers of quasi-antibodies, it probably cultivates as well when they have antibodies as when they have no antibodies, So, when you find virus by PCR, in practice, the viral culture is proportional to the viral load, which we translate by an abbreviation called Ct and if you are below 24 Ct, it means that there is live virus. That’s it.

This website uses cookies to improve your experience while you navigate through the website. Out of these, the cookies that are categorized as necessary are stored on your browser as they are essential for the working of basic functionalities of the website. We also use third-party cookies that help us analyze and understand how you use this website. These cookies will be stored in your browser only with your consent. You also have the option to opt-out of these cookies. But opting out of some of these cookies may affect your browsing experience.
Necessary Toujours activé
Necessary cookies are absolutely essential for the website to function properly. These cookies ensure basic functionalities and security features of the website, anonymously.
Functional
Functional cookies help to perform certain functionalities like sharing the content of the website on social media platforms, collect feedbacks, and other third-party features.
Performance
Performance cookies are used to understand and analyze the key performance indexes of the website which helps in delivering a better user experience for the visitors.
Analytics
Analytical cookies are used to understand how visitors interact with the website. These cookies help provide information on metrics the number of visitors, bounce rate, traffic source, etc.
Advertisement
Advertisement cookies are used to provide visitors with relevant ads and marketing campaigns. These cookies track visitors across websites and collect information to provide customized ads.
Others
Other uncategorized cookies are those that are being analyzed and have not been classified into a category as yet.
Enregistrer & appliquer
Soutenez la presse indépendante !